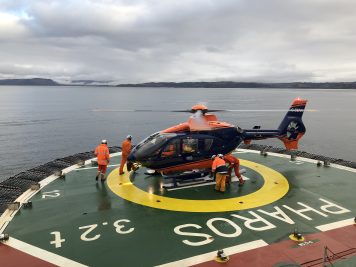 It’s Scottish Apprenticeship Week from 2 to 6 March, a time to celebrate the benefits apprenticeships bring to businesses, individuals and the economy. During the week we’ll be shining the light on our own Deck Rating and Engineering Apprentices who get to travel to parts of Scotland many people can only dream of and where no two days are the same. One day they might be in a helicopter travelling to a remote lighthouse in the Outer Hebrides and the next they could be carrying out buoy work in the middle of the North Sea.

Lachlan Greig and James Addison are in their third year of an Electrical Engineering Apprenticeship combining on the job training with study at Forth Valley College.

“Now I’m in my third year, I’ve had many opportunities to get out on site. Highlights include helicopter travel to the Monach Isles, Haskier, and Mallaid Point in the Western Isles, places I would never have seen if it weren’t for this job.”

James who grew up in Fife said:

“When I saw the apprenticeship advertised with NLB, it stood out from all the others.  I was particularly interested in gaining experience in electrical maintenance as well as being able to travel and see different parts of Scotland.

“I’m now in my third year and working my way towards gaining professional qualifications. I am really enjoying working on site and getting the hands-on practical experience. Working with the Northern Lighthouse Board really is unlike any other job. We get to experience opportunities most people will never have, such as living for two weeks on Muckle Flugga, the most Northerly point in the UK.

“I’ve found the balance of study and practical work that an apprenticeship offers extremely beneficial towards gaining a professional qualification and I’d strongly recommend this route to aspiring engineers.”

As well as its Electrical Engineering Apprenticeships, the Northern Lighthouse Board also runs a Deck Rating Apprenticeship Scheme. The scheme’s been running since 2016 and its first two apprentices secured full-time employment with the organisation when they graduated in 2018.

“The introduction of the scheme has had the obvious benefit of selecting and nurturing young talent to join our workforce. And more particularly, ensures that by the end of their training, the young people have the combination of specialist skills and knowledge that are bespoke to NLB’s requirements such as deck work, buoy maintenance, helicopter operations and lighthouse storing operations.”

Stuart MacBrayne and Cameron MacMillan are the latest recruits of the Deck Rating Apprenticeship Scheme. Both are in their second year of the two year apprenticeship and when not at sea, they attend City of Glasgow College, Maritime Education and Training.

“Growing up just outside Campbeltown, close to the Mull of Kintyre Lighthouse, I have always had an interest in life at sea and lighthouses. I studied at Campbeltown Grammar School before entering full-time employment with the local fuel merchants and shipping agent. After spending over five years working as a Fuel Transport Clerk, I decided it was time to move on and start my career at sea.

“I’m really enjoying my apprenticeship with NLB. During my first two months at sea I had visited more of Scotland than I ever had before. One of my highlights has to be my trip to London onboard PHAROS for London International Shipping Week – sailing up the Thames was a once in a lifetime experience! And another was visiting Hyskeir Lighthouse. This was my first trip off the ship onto a lighthouse and first time flying in a helicopter.

“I would highly recommend an apprenticeship and working at sea to other young people. I have developed skills which will last a lifetime whilst working in a close-knit team and building working relationships with all my colleagues.”

When Cameron MacMillan saw the Deck Rating Apprenticeship advertised, he knew if was the job for him.

“Before joining the Northern Lighthouse Board I spent four years working at Dunstaffnage Marina, a marina and boat yard based just outside Oban. I worked there part-time when I was still at school and then full time after leaving school. It was here that I got a real feel for the industry and learnt the skills for a career at sea.

“After a few years at Dunstaffnage I decided it was time to move on and start my career at sea. And when I saw the job opportunity with NLB I knew it was for me. I’m really enjoying my apprenticeship and have progressed my day to day skills needed for this job massively. Everyone has been very helpful and good to me and I’m learning so many different skills and techniques which vastly improve my learning.”

To find out about Apprenticeships with the Northern Lighthouse Board keep an eye on their website www.nlb.org.uk or email enquiries@nlb.org.uk