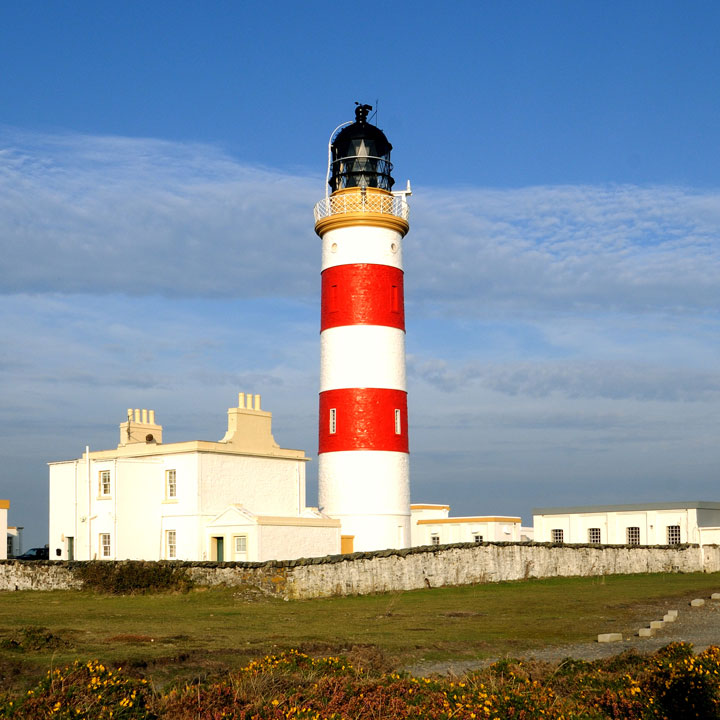 Point of Ayre Lighthouse was established in 1818 and engineered by Robert Stevenson.

At a meeting of the Commissioners of Northern Lighthouses in 1815, Sheriff Rae pointed out that representations had been received from the Chief Magistrate of Greenock and from various trading bodies in the Firth of Clyde, that a light should be erected on the Point of Ayre to make the west coast channel completely safe.

As this area, that in those days, was out of the Commissioners’ jurisdiction, it was suggested that Sheriff Rae should write to the Duke of Atholl and find out if he had any objections to the establishment. The Light Committee then recommended that the Commissioners should apply to Parliament for power to erect a lighthouse on the Isle of Man. The Bill was passed in July 1815. Soon after, a party representing the Commissioners went to Liverpool to attempt to obtain a loan from the trade associations. The loan was necessary as the Commissioners had become liable for a large sum to liquidate the payment of the purchase money of the private right of the Portland family to the duties of the Light of May. They were also involved in the building of the Bell Rock Lighthouse.

Loans amounting to £1,500 were obtained from the West India Association, and the Shipowners Association of Liverpool. Further loans were obtained from the Trade Association of the Clyde who would also benefit from the establishment of the light. The work commenced late in 1815, but lack of sufficient funds made progress slow. A further cause for delay was that the position of the light had to be altered from the original plan as it was found that the sea was eroding the coast at the rate of 7ft per year.

The lighthouse tower was 70ft high and a circular design. The actual date when the light was first exhibited cannot be accurately fixed, but it is known to have been between December 1818 and February 1819.

Around 70 years later an additional small tower was built 250 yards seaward from the main tower. Due to continuous gravel build-up, this tower moved a further 250 feet seaward in 1951, and now stands out on the gravel bank. This small light is known as The Winkie.

Point of Ayre was lit by the dioptric (refraction) method. The light revolved on roller bearings driven by a clock-work mechanism operated by a weight lowered to the base of the tower. In all but the most sophisticated lighthouse, this had to be rewound manually, the diuturnity governed by the revolution of the optic and the height of the tower. This varies from 45 minutes at Maughold Head, 77 ft high and turning every 30 seconds, to 90 minutes at the Point of Ayre which had an eight minute revolution.

In favourable wind conditions, the fog horn could be heard at the Mull of Galloway, 26 miles away. Powered by Kelvin engines, the siren used an intermittent escape of compressed air through a shutter to give a periodic blast from the large horns facing seawards.

Thirteen selected lighthouses sent regular reports to the Meteorological Office as many of the stations were vanguards to the Atlantic weather system. Point of Ayre submitted three hourly reports to the Met Office at Ronaldsway, and these were incorporated in the international broadcasts.

The name Point of Ayre comes from Norse, Eyrr, gravelly beach, or Eriball, and Ayre Point of Raasay.

Point of Ayre lighthouse was automated in 1993.

In 2010, the three General Lighthouse Authorities (GLAs) of the UK and Ireland issued a consultation document following a joint review of Aids to Navigation of the coasts of the United Kingdom and Ireland. The Review addressed the current and future requirements of national and international shipping and those of Mariners. Each Aid to Navigation – light, buoy or beacon – was studied in isolation, as well as in relation to the other Aids to Navigation in its vicinity. As a result of this review it was agreed to discontinue the minor light at the Point of Ayre, known as The Winkie. This light was therefore permanently discontinued with effect from 7 April 2010.

At some sites the Northern Lighthouse Board has sold redundant buildings within the lighthouse complex and are not responsible for the maintenance of these buildings.

White tower with 2 red bands, 30 metres in height. There are 124 steps to top of tower.