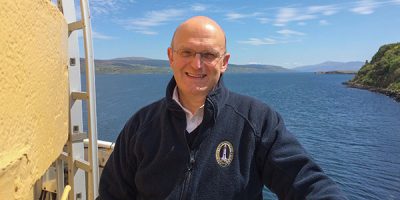 Mike Bullock, Chief Executive of the Northern Lighthouse Board has been awarded an OBE in the New Year Honours List recognising his work for services to the Safety and Welfare of Seafarers.

“This has been a surreal year for the whole NLB team with innovation, adaptability and dedication shown by everyone to make sure we continue to deliver our vital safety service without interruption. It’s been a remarkable privilege to be part of this effort and I am delighted and very proud to be included in the New Year Honours list.”

Mike, who receives the OBE to add to his military MBE, took early retirement from the Royal Navy in the rank of Commodore to join the Northern Lighthouse Board as Chief Executive in April 2014. During his naval career of 34 years, he served in a total of six ships and submarines. He also worked in the British Embassy Washington DC, the NATO Headquarters in Northwood London, the Ministry of Defence in Whitehall and the Pentagon as the UK representative for Logistics. His final appointment was in Navy Command Headquarters, Portsmouth, where he had responsibility for Logistics and Infrastructure for the Royal Navy, Royal Marines and Royal Fleet Auxiliary.  He is a Non-Executive Director of the Scottish Maritime Cluster, a trustee of the Museum of Scottish Lighthouses in Fraserburgh and a trustee of the Northern Lighthouse Heritage Trust.