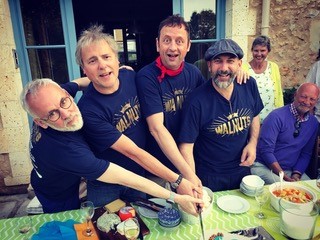 A group of musicians called ‘The Walnuts’, featuring TV presenter Matt Allwright, are beginning a tour of lighthouses and other venues today (11 June 2019) to raise money for dementia charities. The Walnuts describe themselves as ‘a group of middle-aged musicians who play Celtic music, Folk and Americana’.

The band raise money for charities by playing gigs in people’s front rooms, back gardens, kitchens, churches, boats, vineyards – basically anywhere really.  In the past two years they have gigged all over Europe, including the Piping Hot Sausage tour which has since led to their quest for Europe’s finest sausage.  In the lead to date, is the Venter PØlse of Norway.  This year the Walnuts are touring Scotland and are keen to see how Scottish sausages measure up to Norway’s.

During the Scottish tour, the band will be raising money for the Eric Liddell Centre – Scotland’s leading dementia charity.

Davie McGirr: Davie is the founder of Seven Songs for Dementia and in 2015 started turning up with his guitar in kitchens, living rooms, pubs and gardens around the UK.  He’d sing, pass around his collecting tin then leave. When he teamed up with Matt Allright and then the other Walnuts, things started to get musical.

Matt Allright: Matt works as a TV presenter on Watchdog, The One Show and Rogue Traders, but he’s also a talented pedal steel guitar player and vocalist with the group.

Fergus Muirhead: Fergus has been playing the bagpipes for fifty years or so and has played all over the world including the Vatican in front of the Pope, and with the Chieftains at the London Palladium.  Fergus can regularly be heard on a variety of BBC radio and TV programmes discussing consumer rights and also writes for the Daily Record on the same subject.

For more information about the band and the tour visit https://sevensongs.org/2019/05/26/to-the-lighthouse/