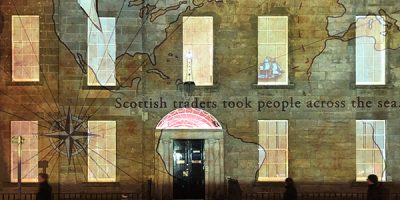 Inspired by Scotland’s Year of Coast and Waters, Message from the Skies sees a collection of letters by five celebrated writers – Charlotte Runcie, Irvine Welsh, Kathleen Jamie, Kayus Bankole and Robin Robertson –  illuminate and animate landmarks around the city of Edinburgh with a maritime theme.

From 1 to 25 January, from 5pm to 10pm every evening, the front of our building at 84 George Street will come alive with the words of Charlotte Runcie. In her letter ‘Lightkeepers,’ Charlotte writes about lighthouses, real and symbolic, and their connection to literature and hope. Using the location of the Northern Lighthouse Board as inspiration, this piece looks at Scotland’s history of lighthouses including those built by engineering pioneer, Robert Stevenson, grandfather of the acclaimed Scottish writer, Robert Louis Stevenson.

Visuals designed by animator Kate Charter, music composed by Pippa Murphy, and narration and singing by Karine Polwart blend together onsite in a combined visual and musical experience that celebrates both Scotland’s literary and maritime heritage.