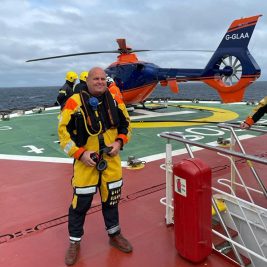 What’s it like to work at Scotland’s tallest lighthouse? What are the logistics and challenges involved in getting there, not to mention removing and replacing 95 battery cells from a 48 metre granite tower?  And more importantly, why are custard creams the King of the Tin?

In this fascinating blog, Mike Hayter, Electrical Incorporated Engineer, gives us an insight into the life of an NLB engineer.

On a personal level, the year 2021 was very much the year of Skerryvore Lighthouse. Having travelled to Skerryvore from Oban on five separate occasions by both ship and helicopter, my experience at this lighthouse has left me with enjoyable memories. Memories born from the humorous camaraderie in the face of mild adversity. 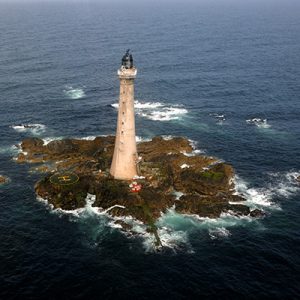 Compared to our hard-working Technicians who frequently travel to lighthouses to attend scheduled maintenance and equipment breakdowns, five visits in one year might not be considered as anything special.

But for me, in my relatively short period with the Northern Lighthouse Board, five trips in one year to the same pillar rock lighthouse, does feel like an achievement.  Especially for an office-based employee with a long-expired gym membership and a loyalty card for a well-known pastry outlet. If my memory serves me correctly, I spent a total of 30 days offshore in or around Skerryvore lighthouse. I was there supporting the Delivery & Planning Team, consisting of Technicians from across the NLB estate.

The challenge we were facing was to remove and replace 95 battery cells located within the 48-metre granite tower. Each battery cell weighing-in at 17.8 kg and measuring 402 mm in height and width and depth of 165mm and 156 mm respectively.

During the year I was involved with tasks that included single day engineering surveys on site and coordinating the flow of work for the battery cell transfer.  Rolling up my sleeves and helping with the physical aspects of the job or ‘grunt work’ as it is known colloquially, also featured.

It was these same tasks that gave me the opportunity to experience this rocky outcrop through all four seasons with visits in January, May, August, September, and October.

Or as I remember it, windy/cold, warm, warmer, windy/wet/foggy/cold, and wet/cold or in terms of sea-state: not-so-calm, calm, calm head for cover there’s a storm coming, and again not-so-calm. 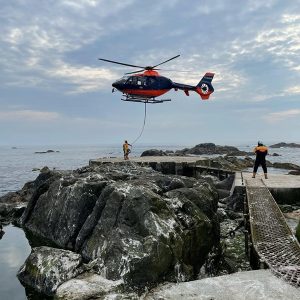 It was during the January visit that I witnessed first-hand the Skerryvore ‘blow-hole’. Before, it was just stories of such ferocity talked about by the ‘old-hands’ – stories that would make your teeth itch. For the uninitiated, the ‘blow-hole’ is a natural occurrence when the tide, wind direction and sea-state conditions align.

Periodic waves power into a sea-carved channel in the reef rock, that then shoots vertically as a spray as it batters against a dead end. It can be quite spectacular depending on the severity of the weather and can determine whether the helicopter will land on the adjacent helipad or not.

Of the 30 days offshore, two days were ‘day returns’ flying out by helicopter from NLB’s Oban Base. I enjoyed a total of 19 days at sea staying onboard NLV PHAROS shuttling by helicopter each day (weather and sea state permitting) from ship to the Skerryvore reef. 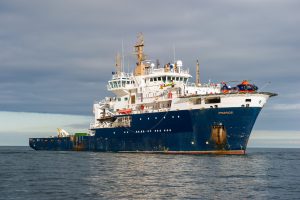 When I joined the Northern Lighthouse Board, I was guided towards the mantra that on site, a meal is the highlight of the day. I always took this with a ‘pinch of salt’ until my visits to lighthouses started. The August and September visits to Skerryvore reinforced this ideology.

A packed-lunch feast courtesy of the PHAROS Catering team is a delight sitting in the sunshine once you become accustomed to the pungent aroma of Skerryvore reef. The packed lunches were also equally welcome taking refuge from the wind or drizzle in a protected spot amongst the reef rocks.

There was usually an abundance of sea birds on display for me to incorrectly identify. This became a lunchtime activity while I chomped on a sausage roll and sipped at some hot coffee. A cup of the latter being an excellent hand warmer during the colder days.

Gargantuan seals were usually present, also loafing about on the rocks – too close for my comfort. If they could be bothered, some would slink off slowly on our arrival. Others remained defiant, routed on their patch of prime real estate, offering looks of disdain before turning away.

On one occasion my colleague spotted a whale as it surfaced twice close to the reef. Typically, I had my back turned both times and it was gone before I could get a bearing on its location. The plentiful supply of available seal meat could have been the attraction.

Waiting for a Weather Window 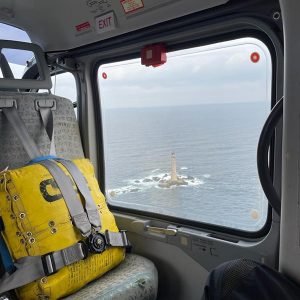 Mother Nature is always in charge and it is on her command when the weather conditions and sea-state make it possible for a safe transit from ship to reef (and return).

During the August and September visits, it was fair to say, to carry out the battery cell transfer we could only aim to be in a state of readiness, waiting patiently  for the right opportunity. Only then did we get the chance to chip away at what needed to be accomplished. We looked for day and evening activities onboard the ship as a preventative measure against boredom setting in. You can only prepare so much with Tool-Box-Talks and work plans.

There were periods when something different and interesting would happen, like the ship changing course and making haste to attend a mayday call only to be stood down on route. Then on the return leg in August, we marvelled at the expertise of the ship’s crew making the recovery of a buoy for maintenance seem effortless. 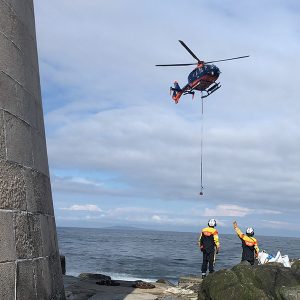 Counting the days and the hours

To put the weather limitations into context, for the August visit, 11 planned 8-hour dayshifts on site were scheduled. But we achieved only 3 of the 8-hour dayshifts with another 4 days resulting in 4-hour shifts of useful work.

Then there was one day when the dayshift was cut short to 6 hours as we had to leave the reef pronto due to the rapidly deteriorating weather conditions. In addition, 3 full days were lost entirely and spent onboard PHAROS due to poor weather.

Finding your sea legs and developing strategies to avoid motion sickness suddenly became a priority. Similarly, during the September visit out of the 4 planned 8-hour dayshifts scheduled, we only achieved 2 of the 8-hour dayshifts. Of these dayshifts, one day was used up to refuel the lighthouse diesel supply and to carry out modifications to the upper balcony winch. This left a single 8-hour shift for battery work. Work during this shift was stopped early again due to a deterioration in weather and followed by another 2 lost days.

On what was to become my final afternoon on the reef for the September visit, standing amongst the crates of unserviceable battery cells ready for uplift by helicopter, I remember watching PHAROS completely fade from view as the fog set in. 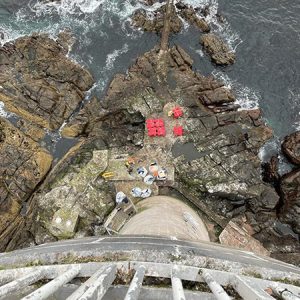 The ship had just repositioned to reduce the distance and helicopter flight time to the helipad.

Ironically, thoughts that a self-heating Hot Pack might feature on the evening menu suddenly came into focus. If events didn’t go as planned, I would try and secure an All-Day Breakfast, with Chicken Curry then Lancashire Hot Pot as a second and third choice in that order regarding the heat-in-a-box meal options.

Fortunately, a ‘weather window’ appeared long enough to uplift the crates on the reef and return them and the team to the ship. A welcome relief for another hot shower, dry clothes, an excellent dinner, and an evening of jovial banter. 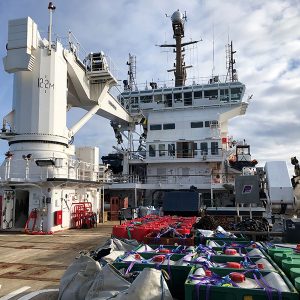 But time was up. The Skerryvore flight for the next day was cancelled due to fog. We would need to schedule in further work for another trip with the ship’s crew providing their essential support.

It had now become paramount to uplift the team working at Dubh Artach Lighthouse as soon as suitable conditions prevailed and before the ship headed north to Cape Wrath. Somehow in the middle of all this, the Skerryvore team boarded three helicopter flights from the ship to Oban. Just another logistical miracle where the magic happens behind the scenes. 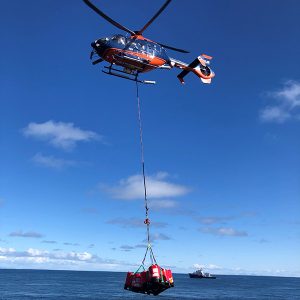 According to my 2021 arithmetic that leaves a return visit of 9 days and an 8-night stay in October within the lighthouse for the first time in a long time. Completion of recent asset integrity work returned the living environment habitable once again for overnight visits.

Electrical work aside, due to the interim austere nature of our quarters, it was imperative to keep on top of the housekeeping. I was happy to get involved with hoovering and washing up in the kitchen, while others prepared superb cuisine, often meat and two veg cooked to perfection. Sometimes a dessert was on offer for those who could fit it in, but usually tea/coffee with a biscuit of choice rounded the evening meal off nicely.

I have come to learn that the Custard Cream variety of biscuit is lighthouse currency and there are deals to be made for the last one in the packet.

Then there was cleaning the shower and toilet (or ‘the heads’ as I once knew it from past wavy navy experience), paying particular attention to the shower head and the legionnaires preventative measures required. This flagged up the repairs necessary to eliminate water leaks from the drainage piping and water header tank outlet. This all follows the fundamental task of transferring the food supplies, equipment, and materials from the reef through the lighthouse and stowing away.

There was also the routine task of maintaining the pressure in our temporary airbeds. It wasn’t uncommon to feel a bit deflated some mornings. On the plus side, in this steady state the comedy squeaks from these plastic mattresses didn’t happen as often. Broken slumber from a noisy bed over a sustained period was a challenge. However, I found lying in a bunk listening to the reassuring purr of the generators below, dampened by the closed floor hatches, to be therapeutic. It helped with the onward journey to the land of nod where snores were loud enough to shake the foundations.

Warm (mostly) and well fed (certainly), it was a time to rest the list of weary biceps, triceps, and deltoids to name a few. The events of the day took their toll. The main culprits being the never-ending ascent and descent of vertical ladders through the floor levels and the manipulation of battery cells into the nooks and crannies where a hoist can’t access.

There are many lessons to be learnt from lighthouse living. I will always try to remember not to leave my waterproof holdall unzipped and left open below a bunk room window ledge. The combination of heavy rain and a change of wind direction one night resulted in a constant weep from the ledge and a bag of damp clothes in the morning. Thankfully a makeshift washing line made from single core cable soon dried out an assortment of laundry in the auxiliary engine room, giving me enough clothing options until I returned home again.

Mike Hayter is Electrical Incorporated Engineer with the Northern Lighthouse Board. He joined in 2019.

Skerryvore Lighthouse marks a very extensive and treacherous reef of rocks lying off the Hebrides in Scotland approximately 11 miles south west of Tiree. It is Scotland’s tallest lighthouse.

Despite advances in navigational technology, lighthouses and other physical aids to navigation are still essential to ensure mariners can safely negotiate our rocky and dangerous coastline. The Keepers may have gone, but human intervention is still key to the delivery of this vital service.

Today NLB employs a team of highly skilled engineers, technicians, locally employed retained lighthouse keepers, seafarers and support staff who are all fully committed to the task. Together they ensure that our aids to navigation continue to evolve to meet the changing requirements of the mariner.