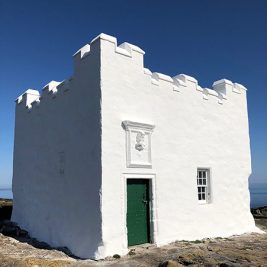 We recently completed renovation work on the Isle of May Beacon in the Firth of Forth. Built in 1636, the Beacon was Scotland’s first lighthouse.

Keith Dewhurst, Civil Engineer Technician with our Project and Renewals Team, led the work. Here, Keith gives us an insight into some of the challenges the team faced.

Accessing the Isle of May for maintenance work isn’t straightforward. As an important seabird nesting area, including ground nesting puffins, we can’t carry out any work from mid-April to September and must get agreement from NatureScot. The island is also an important breeding ground for the largest Atlantic seal colony on the east coast of the UK, which means boat landings aren’t allowed from mid-October to mid-February.

“The combination of breeding seals and nesting seabirds really limits the window of opportunity for carrying out any maintenance work and so logistically it’s always a challenge to plan and co-ordinate. Scheduling the work in and getting NatureScot agreement, allowing for COVID restrictions, unseasonably cold weather and suitable tides for boat landings reduced the opportunity for carrying out the work even further this year.  Coordinating with our main contractor at short notice and making sure their suitably skilled workforce were available for the required traditional methods, and liaising with the boatman, left only a few days in March and April when the work could be done.”

Our work on the Beacon involved repair to the wall render, using traditional lime render and lime wash, along with window and door repairs. As the Beacon is listed as a historic monument we needed to use traditional materials and methods and obtain Historic Monument consent from Historic Environment Scotland (HES). The snap cold spell at the beginning of April almost put the breaks on the lime render and wash being  done but thankfully the overnight temperatures crept up sufficiently.

I’m delighted to say the beacon is now looking suitably loved again, all ready for the post-COVID restriction staycation holiday rush. And the puffins are also looking at their best for the tourists!

History of the Isle of May Beacon

The Firth of Forth was a significant shipping route for Scotland but mariners often complained about the hazard that was the Isle of May and in 1635 work started on constructing Scotland’s first lighthouse. The work was completed in 1636 and initially the light was a fire basket at the top of the small tower standing at only 12 metres high.

This Beacon was of great importance as it helped to provide safe passage for ships. It was privately owned and Mariners were  required to pay a toll to cover the costs of building and maintaining the light. However, there were often complaints that the fire had gone out. The character of the light would naturally vary with almost every change in weather conditions. One minute it might be belching forth great volumes of smoke and the next blazing up in clear high flames, while changes in wind directions would tend to alter its appearance. An easterly wind for instance would have the effect of blowing the flames away from the sea so that the light could scarcely be seen where it was wanted most.

In 1816, the Beacon was replaced by a new lighthouse built by Robert Stevenson. But it’s actually thanks to Sir Walter Scott that Scotland’s first lighthouse wasn’t demolished. When plans for the new lighthouse were being put together, Scott went out to the Isle of May with the Commissioners and insisted that rather than knocking it down the Beacon should become a feature.