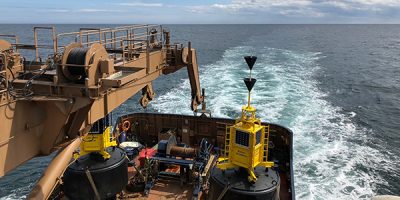 The Maritime Minister, Robert Courts, today announced his decision to raise Light Dues by one penny (to 38.5 pence per net registered tonne).

In his written statement, the Minister said:

A strong and growing maritime industry is vital to the economy of the United Kingdom and it is critical that we treasure and protect this vital artery if we are to remain a world-leading maritime centre.

The work of the General Lighthouse Authorities (GLAs), which provide and maintain marine aids to navigation and respond to new wrecks and navigation dangers in some of the busiest waters in the world, is crucial to underpinning that vision while maintaining our vigorous safety record and continuously improving safety standards.

Light dues, which are paid by the shipping industry such that the GLAs’ costs are met without the need to call on the UK Exchequer, have reduced by 40% in real terms since 2010.

The unprecedented coronavirus (COVID-19) pandemic has, however, added additional operational costs and resulted in a significant reduction in light dues income, reflecting the major impact it has also had on the industry.

To ensure the GLAs have the funding they need to complete their vital maritime safety work, I have, therefore, made the difficult decision to increase the light dues rate by one penny to 38.5 pence per net registered tonne for 2021 to 2022.

Light dues will continue to be reviewed on an annual basis to ensure that the GLAs are challenged to provide an effective and efficient service that offers value for money to light dues payers.

The Northern Lighthouse Board has a statutory duty to collect General Light Dues from vessels calling at UK and Irish ports. Light Dues collected are paid into the General Lighthouse Fund under the stewardship of the Department for Transport. The fund finances the work of the Northern Lighthouse Board (Scotland and the Isle of Man), Trinity House (England, Wales, the Channel Isles and Gibraltar, and Irish Lights (the whole of Ireland).

Light Dues is a tax and the rates are set annually by the respective Shipping Ministers of the UK and Ireland.