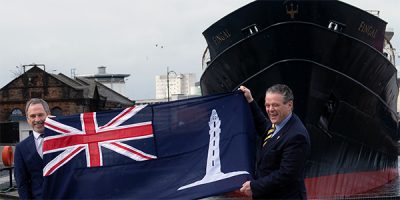 Today, Friday, 22 March 2019, we handed over the NLB ensign to FINGAL, The Royal Yacht Britannia’s luxury floating hotel based in Leith.  FINGAL is a former Northern Lighthouse Board ship that served Scottish and Manx  lighthouses for over 36 years and was bought by The Royal Yacht Britannia in 2016. Berthed at Edinburgh’s historic Port of Leith, FINGAL has been transformed into a spectacular boutique hotel.

Graham Crerar, Chairman of the Northern Lighthouse Board, said:

“We are delighted that FINGAL is once again flying NLB’s blue ensign from her stern. While the ship has been transformed to prepare her for the new role, The Royal Yacht Britannia has made a fantastic job of retaining and enhancing some of her original features, and the story of her former life as a lighthouse tender is highlighted throughout the ship.

“All twenty-three cabins are named after famous Stevenson lighthouses and reflect FINGAL’s rich maritime heritage. We therefore thought it fitting for this historic ship to once again fly the NLB ensign.  We are delighted to be helping make this terrific addition to Leith a success.”