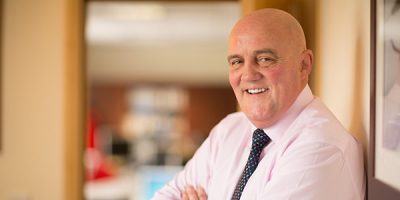 Dick Welsh is to join the Northern Lighthouse Board as the new Isle of Man Commissioner.

Mr Welsh, who received an MBE in the January 2020 Honours List for services to the maritime community on the Isle of Man and Worldwide, will serve for a three-year term, from 1 June 2022 to 31 May 2025.

Mike Bullock, Chief Executive of the Northern Lighthouse Board said:

“We are really looking forward to welcoming Dick to NLB. From a Merchant Navy Cadetship to a serving Engineer Officer and latterly as Director of the Isle of Man Ship Register, Dick’s impressive career at sea and in senior roles ashore means he will be a tremendous addition to our Board of Commissioners.

“This is a unique role which offers the opportunity to contribute to the strategic leadership and governance of NLB, in the delivery of a critical safety service to all mariners.”

Commenting on his appointment with NLB, Dick Welsh said:

“I am incredibly fortunate to be appointed as Commissioner, Isle of Man for the Northern Lighthouse Board. I am really looking forward to getting involved and becoming a valuable member of the Board.

“I have had a long association with NLB lights. As a boy I spent summers at Langness where a family friend had been a keeper. This association went further when I dated a Langness keeper’s daughter. When he was posted to Muckle Flugga, I spent 3 glorious weeks there one summer and visited the lighthouse. Even today I often spend time at Langness, Point of Ayre or fishing inside Chicken’s Rock.”

As a Commissioner, Mr Welsh will help provide non-executive leadership, challenge, oversight and support to the executive team through regular Board and committee meetings as well as participating in visits to NLB’s operational sites across Scotland and the Isle of Man.

The appointment will take effect from 1 June 2022.

The Board of Commissioners are the Lord Advocate and the Solicitor General for Scotland; the Lords Provost of Edinburgh, Glasgow and Aberdeen, and the conveners of the Councils for Highland, and Argyll and Bute; the Sheriffs Principal of all the sheriffdoms in Scotland; a Commissioner nominated by the Lieutenant Governor of the Isle of Man and appointed by the Secretary of State; and up to five co-opted Commissioners.