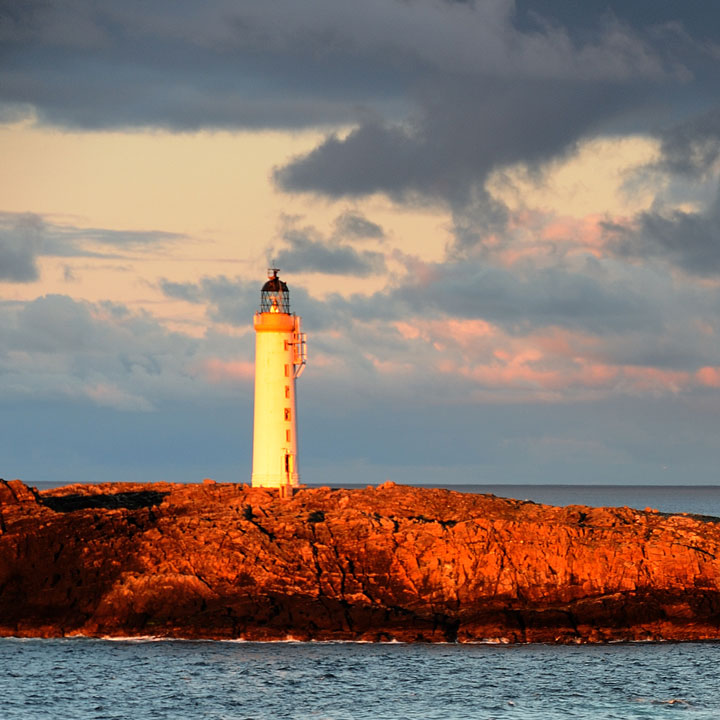 The light was first established on 15 September 1854.

The first light was a temporary structure built on the island of Grunay in 1854 at the request of Her Majesty’s Navy when their Northern Squadron was engaged in the Russian War. The light was first established on 15 September 1854. The permanent building was completed on the island of Bound Skerry in 1858. The tower is 98 foot high and the candlepower 159,000. During World War 2 the Lighthouse Buildings at the Shore Station were machine-gunned on 22 February 1941, fortunately on this occasion no one was injured. On 18 January 1942, a Sunday, at 11.45am a single enemy bomber approached the island from a westerly direction at low level and passed directly over the Lighthouse dwelling houses. One or two bombs were dropped, missed the buildings and fell in the sea. The raider made a wide circle to the east, returning over the Lighthouse Buildings and dropped another bomb which registered a direct hit on the Boatman’s house. The house was completely demolished and the sole occupant at the time, the Boatman’s mother, was buried beneath the debris, sustaining injuries from which she died at Lerwick on 20 January 1942. Other damage on this raid was as follows – Boatman’s wash house and coal cellar demolished, dwelling houses of Lightkeepers and out-buildings etc completely destroyed or otherwise badly damaged. The flagpole was damaged and the framework of the base was also badly shaken.

The station was made automatic and demanned in 1972, the automation light becoming effective from 7 April 1972.