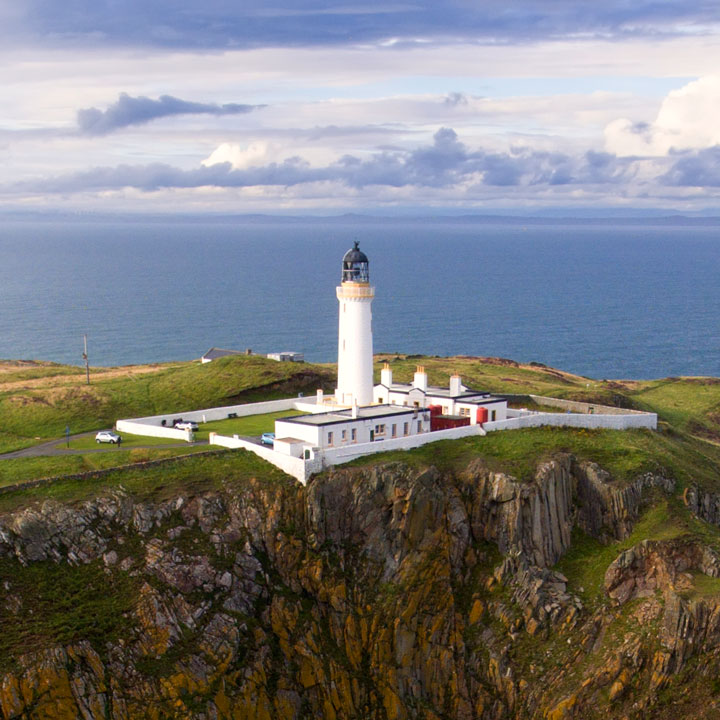 Gulls, gales and grandeur of cliff and sea that is unsurpassed – this is the Mull of Galloway. It’s as far South as you can go in Scotland, without falling off the 260ft cliffs.

The lighthouse was established in 1830 and engineered by Robert Stevenson.

The lighthouse at first showed “intermittent” or “occulting” lights, where two opaque cylindrical shades were moved up or down so as to meet and obscure the light at fixed intervals, with periods of darkness longer than those of light. The cost of this lighthouse was between £8,000 and £9,000. The building part of the work was done by contract, and the engineer fitted up the lightroom, getting some of the articles by contract and others made under his own supervision. The contractor responsible for the building was Brebner and Scott of Edinburgh.

Several changes have taken place at Mull of Galloway since 1828. At one time the lamp was a combination of shining brass and sparking crystal, turning through its two and three quarter minute revolution on beautifully made rollers – so perfect that the 5 tonne  lens could be moved by hand. The lamp was as simple as the familiar tilly, lit by hand with paraffin and then pumped up, for all the world like a camp-cooking stove. But there the resemblance ended for the surrounding prisms, which gave off myriad rainbows on a sunny day, caught the light and magnified it to the power of 29,000 candles.

In 1971 the light was converted to electric. This was a sealed-beam light, mounted on a gearless revolving pedestal, which used a low-voltage rotary mechanisms. The lamp units were light, produced a good beam for a very low power input and as they were sealed in a vacuum did not deteriorate or tarnish, but the main advantage of this system was that it was almost fully automatic.

During the Second World War on 8 June 1944 at 7.30pm a Beaufighter aircraft crashed into the lighthouse stores building. It was foggy at the time, and two men were killed as part of the roof of the store was blown off.

The Lighthouse was automated in 1988 and is remotely monitored from 84 George Street, Edinburgh. Today’s optic system is a Bi Form set up, consisting of a pair of 2 Tier high-powered LED marine lanterns flashing in synchronisation, giving reliability and efficiency.

Community buy-out
In 2012, when NLB was considering the sale of the site, with the exception of the actual tower, the South Rhins Community Development Trust responsible for the management of visitor attractions at the Mull, made the decision to go for a Community Buy Out. The Mull of Galloway Trust was formed and the application for registering their interest to purchase was submitted and accepted by the Scottish Government. After a ballot of the community resulted in 98% of those who voted being in favour of the buy out, a successful application was made to the Scottish Land Fund. The Trust received a grant of £330k which was 95% of the purchase price and the community then raised the final 5%.

On 4 July 2013, the former three lightkeepers cottages, the former engine room which is now an exhibition area, the RSPB centre, Fog Horn and 30 acres of heathland at the Mull of Galloway was subject to a Community Buy Out. The Northern Lighthouse Board still own and operate the lighthouse but are not responsible for the surrounding property/land.

White round tower 26 metres high. There are 114 steps to the top of the tower.

Mull Of Galloway is one of Scotland's Outstanding Lighthouses.