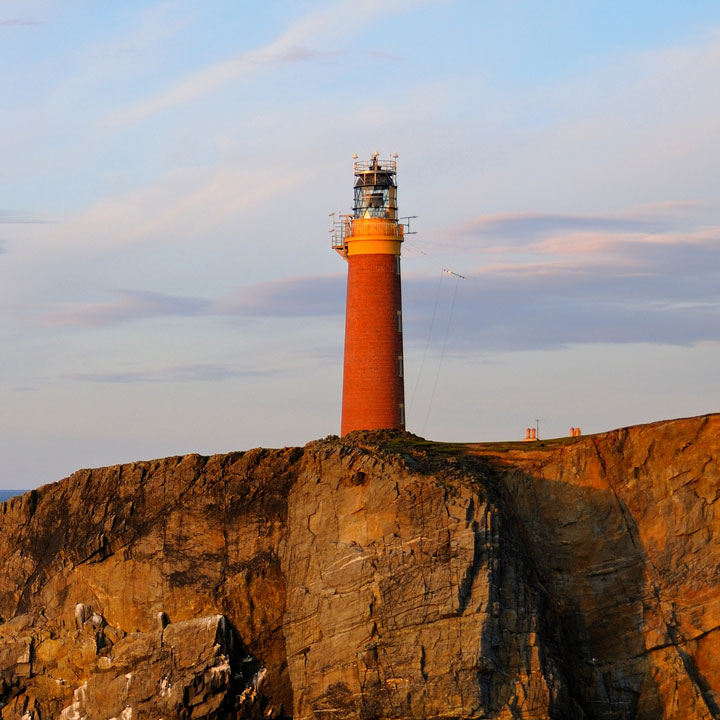 The Butt of Lewis Lighthouse was built by David Stevenson in 1862.

Little is known of the station’s early days, although the first light displayed was probably fixed rather than flashing, but this is not certain. A plaque in the lightroom indicates that the present equipment was installed in 1905, when the characteristics of the light was one flash every twenty seconds. In 1869, paraffin is known to have replaced the vegetable or fish oil hitherto used as the light source, and indeed continued in use until 1976, when it in turn was replaced by electricity.

The light is fixed, and sits inside a large lens; (in effect a giant magnifying glass). The lens revolves around the light, thus giving the familiar flashing effect.

The station became the radio link for the keepers on the isolated Flannan Islands in the early 1930’s, and continued to function as such until 1971, when the Flannans was demanned, and the light made automatic. Today, the Butt of Lewis acts as the monitoring station for the automatic light on the Flannans, North Rona and Sula Sgeir and is the radio control station for the North Minch area.

The Butt of Lewis was manned by three Keepers who lived at the Station with their families. The Station’s claim to fame, according to the Guinness Book of Records some years ago is that it was the windiest spot in the United Kingdom.

The fog signal was discontinued on 31 March 1995 and the light was automated on 30 March 1998. It is remotely monitored from our headquarters in Edinburgh.

The Butt of Lewis is also one the General Lighthouse Authorities transmitting stations for Differential GPS.

Red Brick tower 37 metres high. There are 168 steps to the top of the tower.